Silliness from the official SWTOR forums


I was amused by the pro-story, anti-raiding post in the Star Wars: The Old Republic general forums mentioned in the tweet (original here http://www.swtor.com/community/showthread.php?t=866001):

It is so earnestly over the top that I couldn't resist a bit of fun satire. I was tempted to post this in the above thread, but given forum posters I figured it was better posted here than adding any possible fuel to trollish fires there.

Story content has been in decline for years. The obvious reality that single player participation in story in this game does not justify the cost, so by focusing on multilevel difficulty operations and more inclusive, smaller scale PvP, there is much greater potential than trying and failing to get people to replay the exact same story arc.
If single player story participation does not increase as a results of 4.0, where all story content was nerfed from eight stories to two (in 2.0) to one (3.0 & on), companions buffed to do the fighting for you, the ability to level 1 to 65 in your starter gear with no advanced class, then just write it off and focus on the content that people do want to participate in, the 'MMO bits'.
Let the metrics guide you, don't listen to an over-represented vocal minority anymore. That's what got you guys into the revenue decline mess in the first place - listening to single player story content locusts over the much larger group of people who want the group content MMO are uniquely known for.
Please don't relapse into what you did in RotHC, SoR, and especially KotFE. Return to the glory days of Vanilla when everyone had it all.
Posted by Piper at 10:47 AM No comments:

The Wait for PvP content: A Chronology of Battlegrounds and Warzones (Updated)

One of the constant PVP requests for SWTOR has been for new Warzone maps. I decided to see just how long it has been been between the release of new maps, not just for SWTOR, but for World of Warcraft and Rift as well. I wanted to see where SWTOR’s wait time between maps fit in among other successful MMOs. 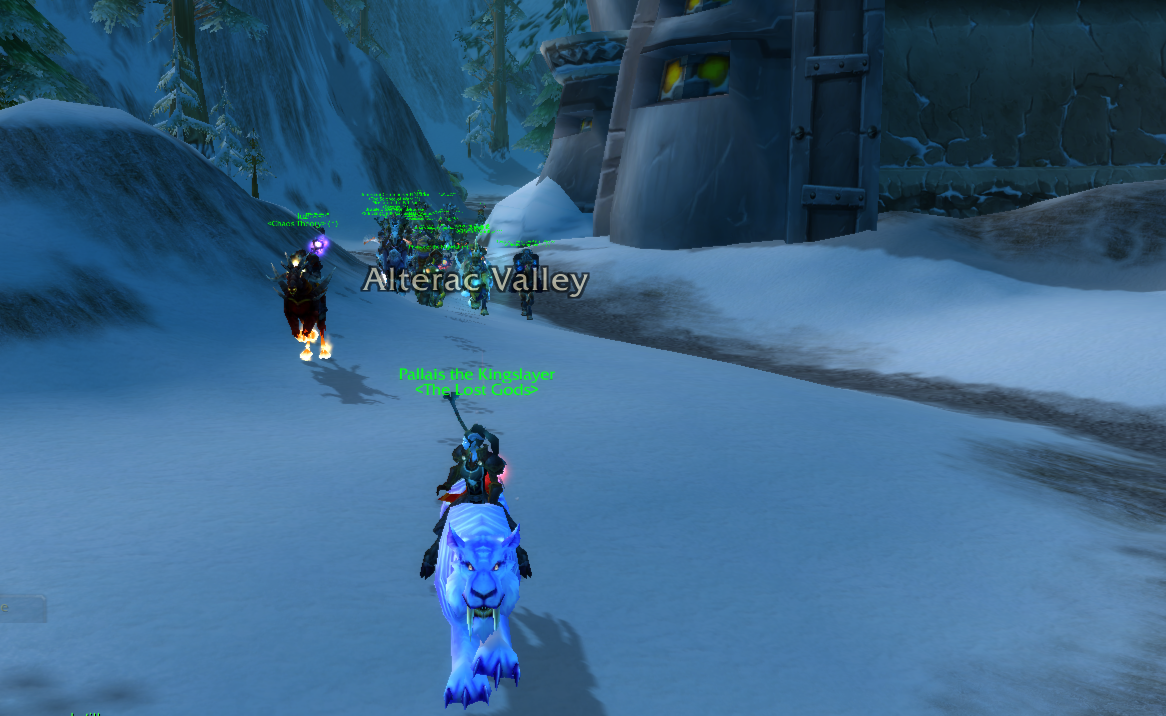 Leading the pack in 40 Alterac Valley.

First off, let’s look at the battlegrounds in World of Warcraft. Fair or not, WoW is the MMO most commonly used in comparison for MMO content. Warcraft’s Arenas and Area PvP aren’t on this list because they aren’t a part of the random battleground queue. If you were to include those two pvp areas, then Warcraft’s PVP content gets that much larger. 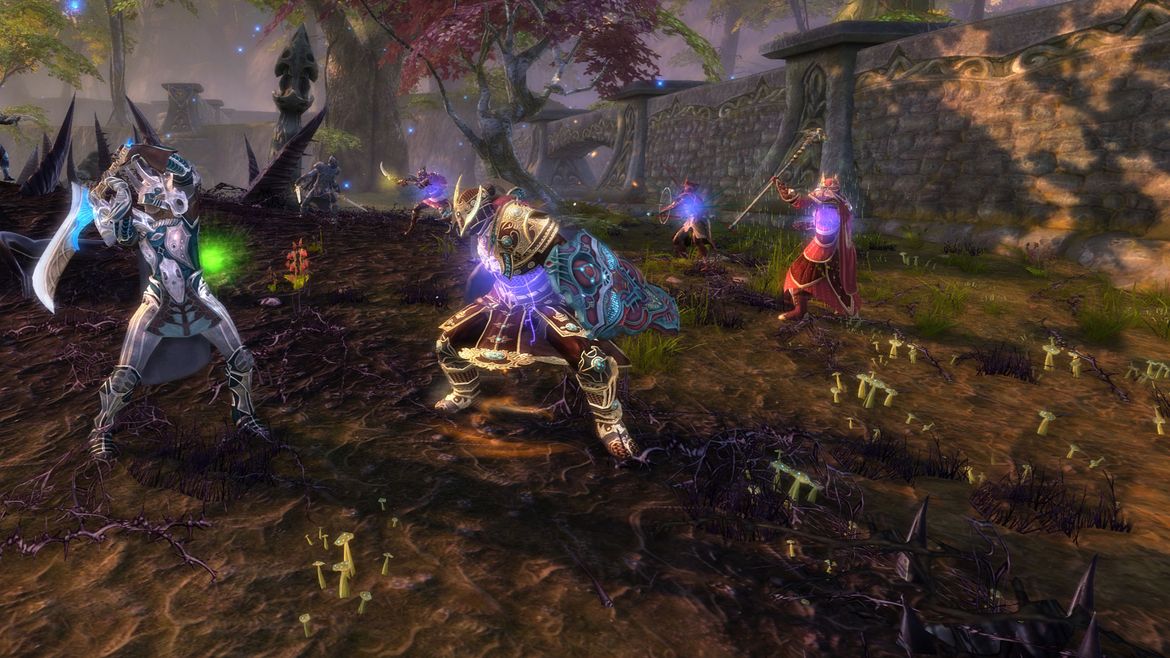 Rift is considered one of the best examples of a free-to play-game. Rift’s instanced PVP combat is called Warfronts. I haven’t played Rift enough to be familiar with Warfronts so this information is from various online sources. If I’ve made any mistakes feel free to point me to the definitive source via comments or email. 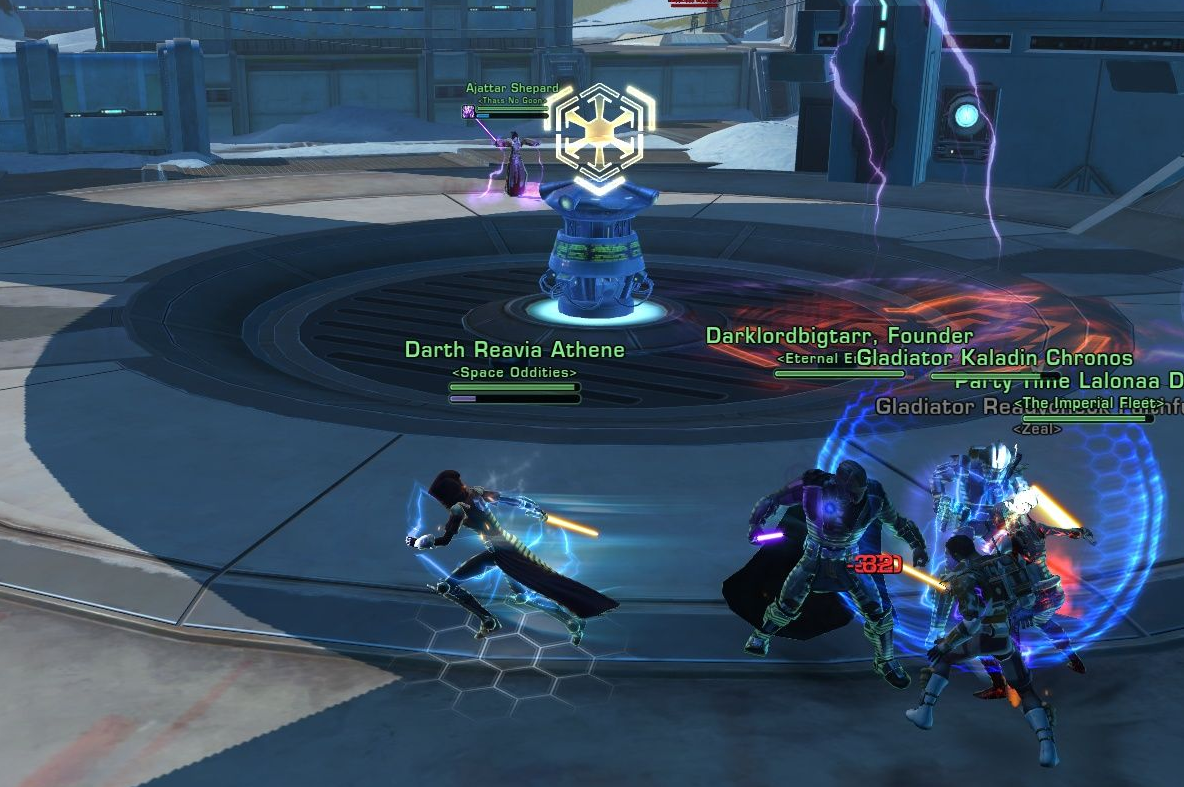 Defending Mid in Alderaan Civil War.
Now we have Star Wars: The Old Republic. The two most controversial parts of SWTOR’s Warzone strategy was the removal of ranked eight man Warzones and the addition of arenas as part of the regular Warzone map rotation. Ranked eight man Warzones were popular among a subset of players, but that subset wasn’t large enough for Bioware to want to commit the resources to its continued development. (See note below about participation.) Instead Bioware went with 4v4 arenas. The controversial part about arenas is that Bioware included arenas as a part of the Warzone map rotation. While the size of arenas fit well with SWTOR’s multiples-of-four instancing it was viewed as a stopgap measure that didn’t address the requests for cross-server queueing, a tournament server, or a megaserver (similar to what Elder Scrolls Online uses).

"Wait Time" is the number of days it has taken the listed PVP content to appear since the previous entry. I have included expansion release dates for context. 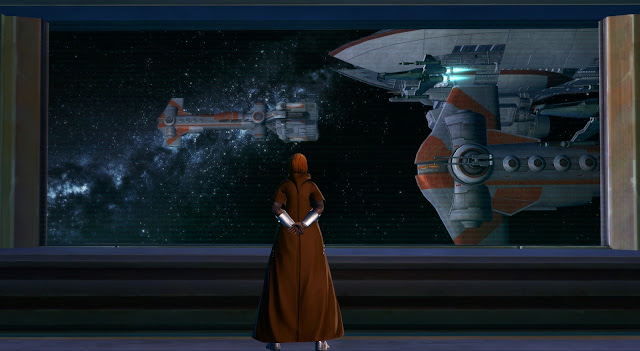 While making these charts I ran into the classic “apple vs orange” situation, trying to make the comparisons on the charts equal. I eventually decided the easiest thing to do was just point out the differences. Below I outlined some of the non-battleground/Warzone PvP content available in WoW and SWTOR, as well as pointing out some of the problems with Arenas.

Wintergrasp, Tol Barad, and Ashran are all Area PvP attempts to recreate the open-world PVP of Southshore vs Tarren Mill from Vanilla World of Warcraft. (The 10th anniversary of WoW had a limited time recreation of Southshore vs Tarren Mill as a 40 player Team Deathmatch map.) Unfortunately none of these are true open-world pvp because Blizzard applies equality of forces for "balance" reasons.

SWTOR's version of open world PVP was ... Ilum. I think we can all agree it is better off left for dead, only remembered as how not to do open-world PVP.

Outlaw's Den on Tatooine is a free-for-all area allowing you to deathmatch against your own faction. WoW has four equivalent areas (Gurubashi Arena, Outland Nagrand Arena Floor, Circle of Blood in Blade's Edge, and the Darkmoon Deathmatch [week long event once a month]). While these areas are great for player run PVP tournaments, these areas simply don't pull in other types of organized or unorganized PVP.

A possible issue with SWTOR’s eight man ranked is that it only existed during the first (hideously long) preseason. This preseason lasted from patch 1.2 to patch 2.4.3 (2012-04-12 to 2013-11-12, 579 days). We’ll never know if having actual seasons with rewards would have increased participation enough to have made it worth the development time to support eight man ranked.

Arenas are problematic because each game handles them differently. WoW has a separate queue for arenas. SWTOR, on the other hand, places arenas in the regular Warzone queue in an effort to quicken queue pops. Another issue in comparing Arenas is that WoW has 2v2, 3v3, and 5v5 arenas and SWTOR has the single size of 4v4, but you can queue solo or as a team. It gets even worse with ranked queues as WoW has the player population and technology to have cross-server ranked battlegrounds and arenas. SWTOR as of this writing doesn't have the technology in place to overcome the issues of the player base isolated across various servers.

After looking at these MMOs, I think it shows that new maps on a regular basis are important to sustaining PVP at all levels of play. While balancing classes for PVP may be more important (possibly even more important than PVE balance as nerfed Ops bosses don’t complain on the forums), it is the content we see, the playgrounds we interact in, that keep us going. The “hey, a new Warzone map” does more to sustain the idea that PVP is a major focus of the developers than any other single PVP change.

While SWTOR had a reasonable amount of Warzones for the age of the game when Shadow of Revan launched, a new Warzone is something we’ve come to expect with any expansion of every MMO. The new map doesn’t have to be there when the expansion launches, but it is something that needs to be a top priority during the time the expansion is current content. I’m hoping that at least one map is part of the Fallen Empire reveal on June 15, or is a part of a potential second half of 2015 roadmap.